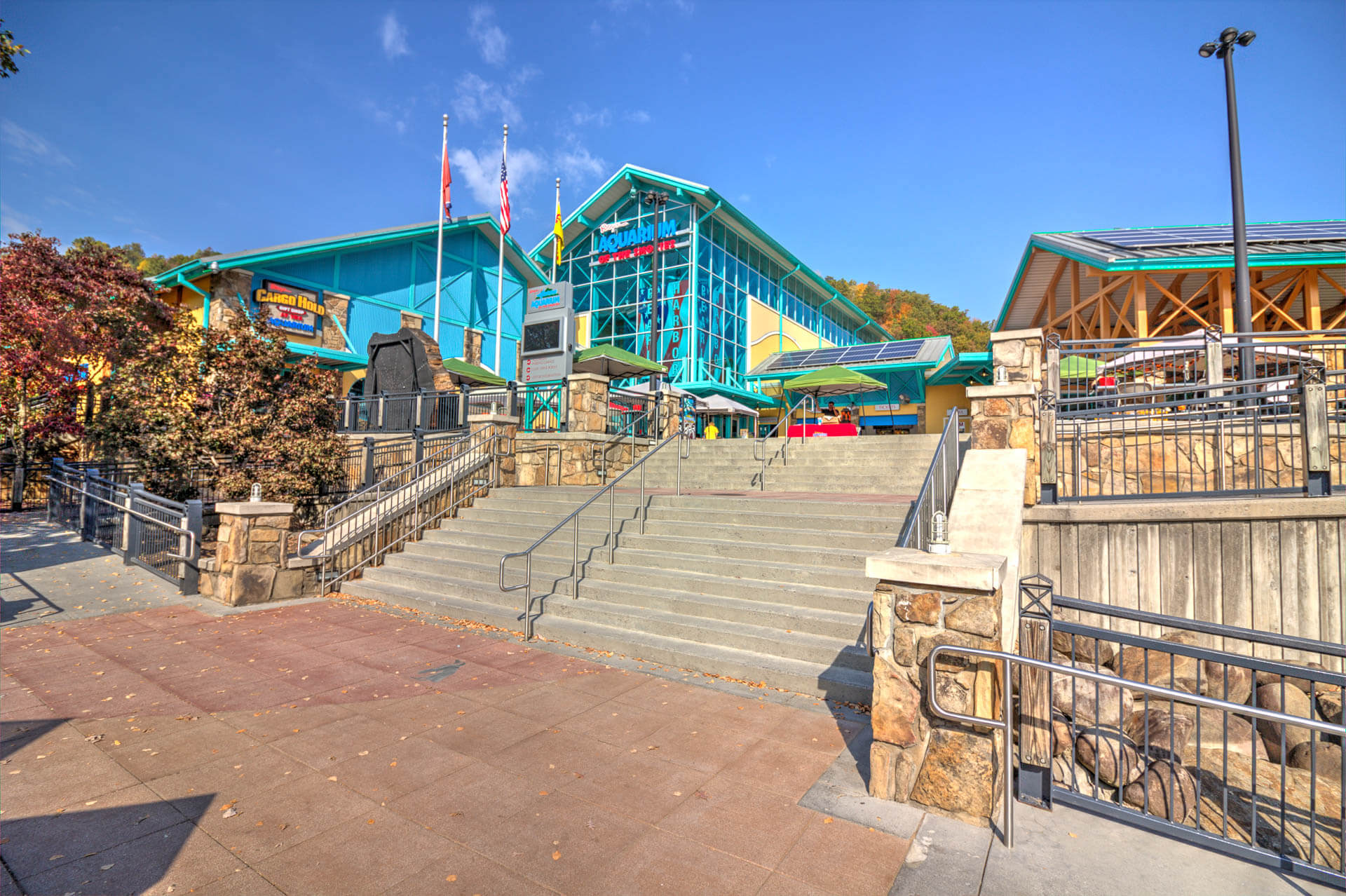 There are wonders of nature like the giant Pacific octopus and the Japanese spider crab, the largest crustacean in the world. The aquarium also boasts its share of undersea “tough guys”, like moray eels, jellyfish and the giant red-bellied piranha. In Shark Lagoon, some of the ocean’s most wondrous species swim into view, including sand, black tip and bonnethead sharks.

The centerpiece of Ripley’s Aquarium of the Smokies is the world’s longest underwater aquarium tunnel. The clear acrylic tunnel is submerged in a million gallons of water, and guests are transported through it along a 340-foot moving walkway. You’ll find yourself safely surrounded by most of the aquarium’s residents as they swim all around you, seemingly close enough to touch.

Tours of Ripley’s Aquarium are self-guided, and the facility is laid out in a way that takes you along a planned route, but still leaves room for you to stop, look or backtrack at your discretion.

As part of its mission to combine education with entertainment, the aquarium operates on site classrooms where staff educators use lectures and hands-on demonstrations to expand visitor knowledge of the sea and its residents. One innovation that’s sure to be a hit with visiting youth groups is “Sleep With The Sharks”, an overnight field trip during which kids can bring their sleeping bags and camp out in the underwater walkway.

According to Karl Thomas, Director of Marketing, Ripley’s Aquarium of the Smokies is planning special group events throughout the year and is capable of hosting themed parties. Packages that combine meals and tours are also available, giving group guests unique feeding experiences. They might dine in the Jules Verne room, with its own window into Stingray Bay, or enjoy a meal in the Veranda, the aquarium’s upscale restaurant that offers dining along the Little Pigeon River, or grab a quick meal in its Feeding Frenzy restaurant.

The number and variety of aquatic species assembled for Ripley’s Aquarium of the Smokies is huge, so much so that Frank Bulman, director of husbandry, doesn’t even hazard a guess. “We span the globe -from South America to Japan, to Australia to the Caribbean and both coasts of the States. I think we’re as diverse as any aquarium in the world. Here is a glance at some of the Aquarium residents:

Tropical Rainforest:
Poison dartfrogs get their name from the fact that they’re highly poisonous in their native habitat, so much so that natives poison their blowgun darts by rubbing them on the skin of the frogs. There are several species. They’re colorful, some are fluorescent lime green with black, some bright yellow and black, some blue and some red and blue. You’ll think they’re not real until you see them hop.”

Freshwater stingrays, a large piranha exhibit, giant red-tail catfish and green iguanas are among other species found in the Amazon Rainforest exhibit.

Coral Reef:
Lots of “pretty fish” are in this exhibit, colorful angelfish and butterflyfish, as well as various wrasses-which change colors.

Gallery of the Seas:
Little jewels in this gallery include seahorses and seadragons, with leaf-like appendages that resemble the seaweed in which it lives.

The gallery is also the domain of the octopus, both the giant Pacific octopus and a cuttlefish, a squid-resembling animal that flashes different colors. Jellyfish, living coral and venomous fish such as the lionfish and scorpion fish also reside in the numerous small aquarium exhibits.

Other displays include Japanese spider crabs, the largest crustacean in the world which reaches up to 10 feet in leg span.

Dangerous Reef:
In this largest exhibit are the sharks. The sand tigers with long fang-like teeth, the sleek sand bar shark with its high dorsal fin, and the bottom-dwelling nurse sharks which seem to suck in their food are close enough to touch. Snappers, jacks, tarpon, porkfish and others making up a crossection of reef life populate the Dangerous Reef.

Other Exhibits:
In Monterey Wharf, a kaleidoscope of color, includes the beautiful but deadly sea anemones, the starfish known as bat stars and rockfishes.

Sting Ray Bay features several different kinds of stingrays, the flat-bodied creatures that can range in size from 5 inches to 10 feet across and weigh more than 660 pounds. Want to pet one? You’ll have a chance to at Sting Ray Bay.

The Discovery Center will provide children an opportunity to examine horseshoe crabs, more a spider than a crab, and one of the oldest living species. Children and adults will also be able to get up-close views of such oddities as puffers, so named because they puff up to increase in size, trumpetfish, which swim upside down, and deep sea isopods, found 2000 feet below the sea.

The opening marks Ripley’s second foray into the aquarium field. The company’s first aquarium opened 3 and a half years ago in Myrtle Beach and has become South Carolina’s most visited attraction, according to Bob Masterson, Ripley’s President. “I think we do a better job at building aquariums than anybody,” he continued. “You get more value per square foot, or per gallon of water-whichever way you want to look at it.” Masterson said Ripley’s officials are dedicated to providing the highest quality of care for the sea creatures. “We do everything we can to care for and feed the animals properly,” he said. “We also help in the effort to save the green sea turtles we have here,” he said. “We are very sensitive to environmental issues.”

Masterson said he expects the aquarium to attract about 1.5 million visitors annually and possible more. “We should do great here.”

The aquarium is only the latest in a series of significant investments by Ripley Entertainment in Gatlinburg. “Ripley’s has more invested in Gatlinburg than in any other city”, said Steve Ellis, Ripley’s marketing consultant, estimating its total investment at up to $60 million.

Ripley’s Believe It or Not Museum has been a part of the city’s scene for 30 years. Other properties are Ripley’s Moving Theater and Ripley’s Haunted Adventure.