New Years Eve at The Island 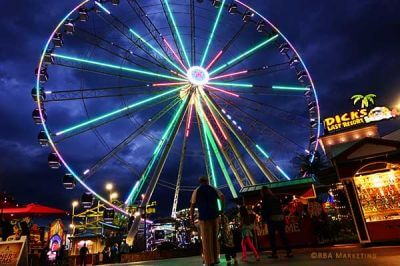 New Years Eve at The Island

For a lot of people, 2016 has likely been the wildest and most difficult year of the decade or even the millennium. The election, the weather, the stock markets, the news... it's been a long time since things had been this "interesting" in America, so if you're looking to have a big, awesome party to put 2016 to rest and start the new year off with a literal bang, The Island in Pigeon Forge is where you want to go!

The Island, for those who haven't been there yet or had a chance to discover it, is a town center and attraction complex in Pigeon Forge between the main parkway and Teaster Lane. It's where people of all ages can go, meet up, play, have a beer, connect to the rest of town, do some gift shopping and even enjoy special events like the one we're about to tell you about.

At 8:00PM on December 31st, the already near-constant party at The Island shifts into 4th gear with the New Year's Eve bash. There will be live entertainment with a concert by Fairview Union, a midnight ball drop, lights, water displays from the center fountain and more. At the stroke of 12:00AM, we close the old year out and start the new year with a literal bang as fireworks explode overhead. It will be an unforgettable experience for all who attend.

And that doesn't even count the list of already available fun things to do and explore onsite. Take a look at this:

* The Great Smoky Mountain Wheel (yes, that huge ferris wheel you see in the background as you drive through Pigeon Forge).

Yes, that could be you and your family/group having the time of your lives as you trickle down the last hours of 2016. Where else in the Smokies could you ride an absolutely huge, lit-up ferris wheel after eating Pomme Fries or pepperoni pretzels, sample some Smoky Mountain Moonshine while the fountain just outside plays a complex water choreography, shop for magic, comic book gifts and puzzles before challenging an escape game and adventuring through the seventh dimension - just to kill some time before the fireworks explode overhead without ever having to get back into your car until it’s time to go? Nowhere, that’s where!

Bring the whole family out for a New Year's they'll never forget in Pigeon Forge! See more on The Island